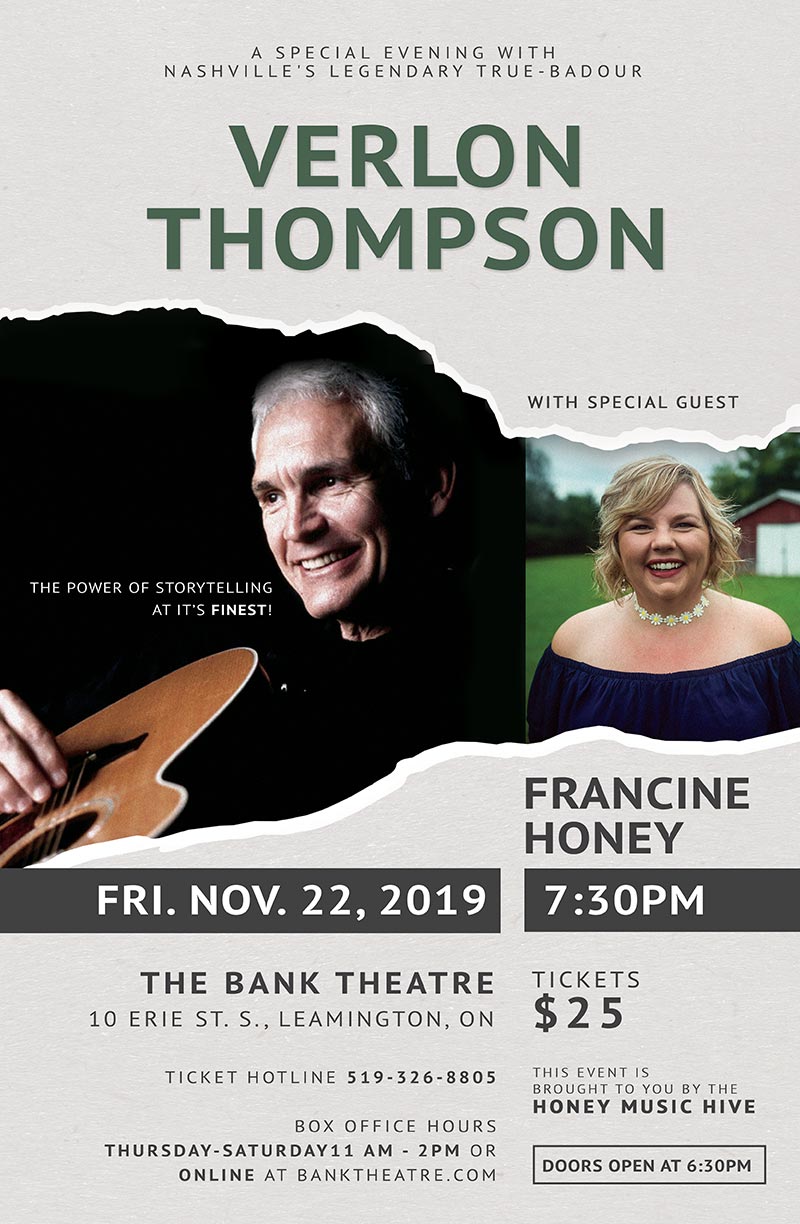 Thirty years as a professional songwriter and traveling troubadour serve as credentials. As a solo performer, and as the trusted sidekick of Texas Americana songwriting icon Guy Clark, Verlon has viewed the world from stages everywhere from Barcelona to Binger (his hometown in Oklahoma).

Equally important in his songwriting and live performances, Verlon’s guitar work cannot go unnoticed. His guitar can be heard on recordings by Restless Heart, Pam Tillis, and many more, including, and especially Guy Clark.

Verlon Thompson is currently on the road. Or in the studio. Or writing in his bunkhouse on the river in Tennessee…
….but never far from the fertile plains of Oklahoma.

We are thrilled to have him find his way to Leamington for a special evening showcase of his talent. Verlon will be facilitating a songwriting workshop for the week-end. Francine Honey will be his special guest. Verlon has been a mentor of Honey’s and plays guitar and sings on Honey’s upcoming Christmas album, where Honey recorded one of Verlon’s original songs. If you are not a fan of Verlon’s yet, you will be a forever fan when you leave.

Hard-luck stories can have happy endings. Especially in Francine Honeys world. The bilingual Ontario singer-songwriters third album To Be Continued features tales of heartache and struggle, loss and crisis many drawn from her own life. Along the way, the down-to-earth performer also shares two fundamental lessons: You are not alone, and hope is always around the corner. A songwriter since childhood, and a former civil servant, Francine packs a lifetime of emotion into every song. Her music has taken her across Canada and the U.S., and on to the U.K., Switzerland and Italy.

Any cookies that may not be particularly necessary for the website to function and is used specifically to collect user personal data via analytics, ads, other embedded contents are termed as non-necessary cookies. It is mandatory to procure user consent prior to running these cookies on your website.