The Bank Theatre Raises Curtain To $400,000 ~ Fundraising Continues Throughout 2019 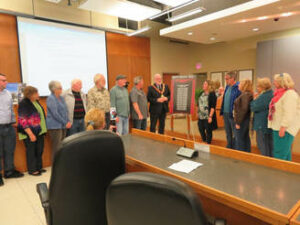 The Bank Theatre will undergo extensive renovations fall/winter 2017 into 2019. Officially announced Monday, October 23, the Municipality of Leamington will match dollar for dollar private and corporate sector donations up to $400,000 with a deadline of six months!

YOU DID IT, THANK YOU!

We thank our community, the Municipality of Leamington, our funders and sponsors within the private and corporate sector for their generous and continued support toward completion of your state of the art facility, where community gathers! ​

Ursula Tiessen, President of The Bank Theatre joined by Board Member Dennis Dick expressed their many thanks to council and the community.

Tiessen said “I have to be honest, the task seemed daunting, but we were up for the challenge. I’m happy to report that we were able to raise the full amount of $400,000, in fact, we are actually a bit over with some donations still to come. We did it! We couldn’t have done it without the many generous donations large and small. This is great news for the theatre, the uptown core and our whole community!”

The matching fund campaign began October 23, 2017, in council chambers with a deadline of 6 months to meet the challenge. By the new year, donations had come in, raising the curtain to $100,000. Michael Honey and his father Gary came forward with a $100,000 contribution from the Honey Family Foundation. The contribution brought the campaign to the halfway point and the Honey family hoped it would inspire others to make donations.

Culture and Tourism Developer of the Municipality of Leamington Kyra Knapp presented a report later in the evening to council chambers indicating that 38% of millennials identify music and entertainment as a top interest when they visit a town or city. Mayor Paterson reflected that “This brings us back to the great work as demonstrated tonight by representatives of The Bank Theatre to bring performing arts to the community.” 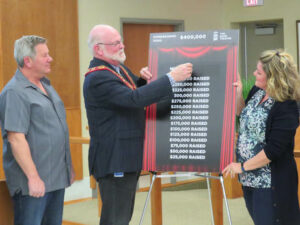 Ursula Tiessen then invited Mayor Paterson to raise the curtain the final $25,000, along with The Bank Theatre fundraising committee as well as Michael and Francine Honey, saying “Your tremendous support really helped us to meet this goal.” Tiessen went on to say “This does not complete our fundraising efforts, but with these funds, we are well on our way to completing the theatre. Our goal is to complete as much as we can before we reopen. We are so thankful to all of our community for your support.”